42nd Street’ goes back to roots at Broadway Theatre of Pitman 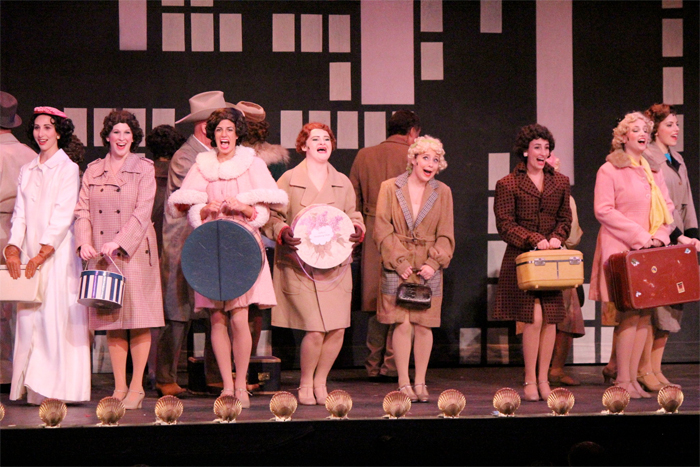 “42nd Street” is going back to its 1930s roots at the Broadway Theatre of Pitman — open through Nov. 24 — with an all-female ensemble taking the spotlight.

“We’re actually doing things a little bit differently,” said Megan Knowlton Balne, of Somerdale, the show’s director. “Back in the ’30s you didn’t have male ensembles. So we only have women in the ensemble.”

The musical, which debuted in 1980 on Broadway, was inspired by a novel written in the ’30s, Balne said.

“The story really came out in the ’30s. And our show hearkens back to the show’s roots,” Balne said.

In order to have a girls-only ensemble, Balne had to pitch the idea to her music director, who in turn, figured out the harmonies without any male voices.

As for the dancing, the cast of women — two of the cast members are tap instructors — are “the best of the best,” Balne said.

These are strong tappers with strong dance backgrounds, Balne said.

And the choreographer is a tap expert as well.
The cast of ’42nd Street’ is shown performing in a scene from the musical at the Broadway Theatre of Pitman.Photo by Elizabeth Ryan

“Our choreographer specializes in tap, so the routines look really good,” Balne said. “The sound is wonderful and the arm movements and upper-body movements and synchronization makes it all very interesting.”

A fan of period pieces like “42nd Street,” Balne was thrilled to be chosen to direct this fun, family-friendly musical.

“I would prefer to direct this type of show, whether it’s a straight play or a musical,” she said.

“42nd Street” tells the story of a chorus girl who ends up stepping in for the ailing lead in the show and becomes a star overnight. With classic Broadway tunes that include “Shuffle off to Buffalo,” “You’re Getting To Be A Habit with Me,” the title song “42nd Street” and “Lullabye of Broadway,” it’s definitely a classic musical perfect for audiences of any age.

“I still have my favorite songs,” said Balne. “The music is great. Normally by this point I’ve heard the songs so many times. But I still love them all.”

An attorney by day, Balne, who has been involved in the Broadway Theatre of Pitman since its second season, has done “numerous things” at the theater. This is her third time directing.

And she’s thrilled to be in the director’s chair with this talented group of performers.

“They’re all really talented. And there’s always something happening in this show. You won’t get bored,” she said.