Are arts the answer for Woodbury? 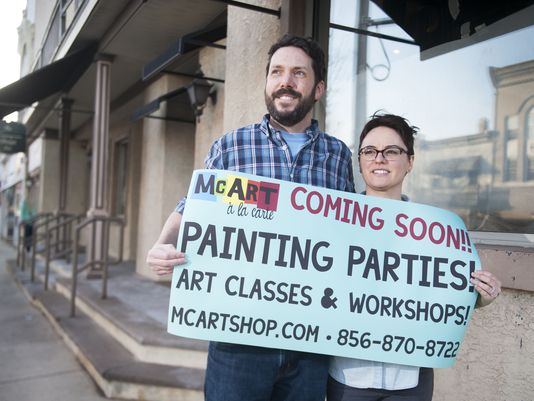 The “coming soon” notice in McArt a La Carte’s storefront window is a “huge step of faith” for a Woodbury couple set to open the art studio in mid-March.

For Erin and Jim McHugh, opening a studio anywhere would be a risk.

In Woodbury, the rent for the studio space at 1 S. Broad St. is lower than Collingswood, but the risk is a bit higher, they said.

“People don’t see (Woodbury) as a place to visit yet,” Erin explained.

But the couple couldn’t turn down an opportunity to open an art school and gallery in a Gloucester County city that could be on the verge of something cool.

South Jersey downtowns from Millville to Swedesboro are finding economic development success in the arts.

“If you’re not tapping into the creative community, it’s just not going to fly,” said Jacquelynn Knight, a local artist and vice president of the Fall Arts Festival Coalition in Woodbury.

The coalition, founded more than three years ago to plan the festival, is an 80-member group invested in connecting the city’s blooming arts community with its ongoing and aggressive economic development work.

The coalition pushes “creative place-making” — building pockets of gathering spots throughout the city — as “the cornerstone of economic revitalization,” according to Knight.

The McHughs popped up on Knight’s radar last year when the couple first participated in the arts festival. Since then, the coalition has been the couple’s greatest supporter, encouraging them to locate in Woodbury instead of Collingswood, Pitman or another town with an established arts scene.

It’s hoped the McArt shop would be a meet-up spot for young artists, drawing foot traffic to Broad Street.

“The cities that are going to survive are the ones that are reclaiming a sense of space,” Knight said.

“Maybe it’s not happening in government, so what you have is this emergence of organizations trying to do it themselves in a creative place-making revolution.”

“The community itself, from its residents to the people who visit, have always been into art. Whether or not it would carry a whole entire town, that has yet to be seen. A downtown is made of a lot of different things.”

Economic Development Committee support of an arts plan was critical in Pitman, according to Lisa Morgey, a borough EDC member.

“Every little town is interested in the arts in some way. Wherever there are artists, there tends to be a transformation of some sort,” Morgey said.

For years it was obvious Pitman’s main street success — whether storefronts were full or empty — was tied to the stability of the Broadway Theater.

The EDC went forward with plans to grow businesses around the Broadway Theater when the playhouse was purchased by its most recent owner.

It’s dabbling in its own creative place-making a project — the transformation of an alley into a pocket park.

Theater Plaza next to the Broadway Theater would be built from donated funds and there is a GoFundMe site online.

Events, including First Fridays, are essential to “keep people aware of what’s downtown.”

“Fourth Friday helped. It injected some life into the downtown,” Morgey added.

“It was a signal to people to locate here.”

The FAF Coalition, through grant opportunities, is in the planning stages for similar programming and possibly permanent places for citizens to gather, Knight said, declining to reveal plans.

Woodbury businesses are already beginning to plan their own programs, including Tiki Tiki Board Games’ game night at the city’s library and a Broad Street pizzeria.

“It’s a wonderful thing to have like-minded people in town,” Knight said.

For the McHughs — who used Kickstarter to fund the studio’s startup and Facebook to solicit help in getting it ready — there’s still more work to do in attracting business to their shop and the city.

“Woodbury just needs a few things to work together … it just needs a couple more places opening all at once,” Jim McHugh said.

“People are waiting for something to happen,” his wife added.