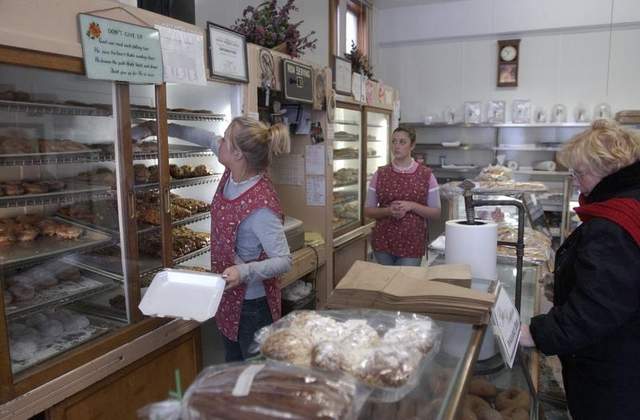 Happy news for doughnut lovers! A Deptford couple has purchased Pitman Bakery, closed at the end of 2012 after more than 40 years in business.

“For the last year, people have been stopping me on the street and at traffic lights asking if I sold the bakery. They kept telling me they want their doughnuts, they want their Bismarks (thick, custard-filled doughnuts).”

Bernard and Anna Rosiak opened the shop in 1968 after moving to Pitman from Wilkes-Barre, Pa. Bernard Rosiak, who died in 2006 at the age of 78, was a World War II veteran. The couple’s six children and in-laws helped run the business over the years.

McClave would not disclose the sale price. Prudential Fox & Roach Realtors originally listed the property for $349,000 in early 2013.

The sale included a pair of three-bedroom apartments above the store and all the equipment in the shop.

Daniel Murphy said he and his wife hope to open the store by early spring.

“We have some work to do, but that’s what we’re shooting for. But you only have one time to make a first impression, so we want to do it right. If we open by Easter, that will be great.”

Veronica is an emergency room nurse at Kennedy University Hospital in Washington Township. She said she’s been baking for 20 years.

“It’s my passion. Whenever I feel stressed out, I go into the kitchen and start baking.”

Veronica promised customers all of their favorites.

“I just want to turn on the mixers and start making every type of doughnut, cookie and pastry imaginable. We’ll pack the shelves with all of the tasty treats our customers want.”

Pitman Councilman Jim Pierpont has been going to the bakery since he was a child.

“It’s fantastic news. I can’t wait for them to open so I can get a Bismark, and I look forward to being one of their first customers,” added Pierpont, who owns Pitman Cards & Gifts on Broadway and walks by the bakery every morning on his way to work.

“The community is really excited.”

“The bakery has always been a big part of Pitman,” said Fitzpatrick. “To have it back open is a big plus for our downtown because it’s been a year since it closed.