Pitman councilman who ended shooting at McGuire base: ‘I’m no hero’ 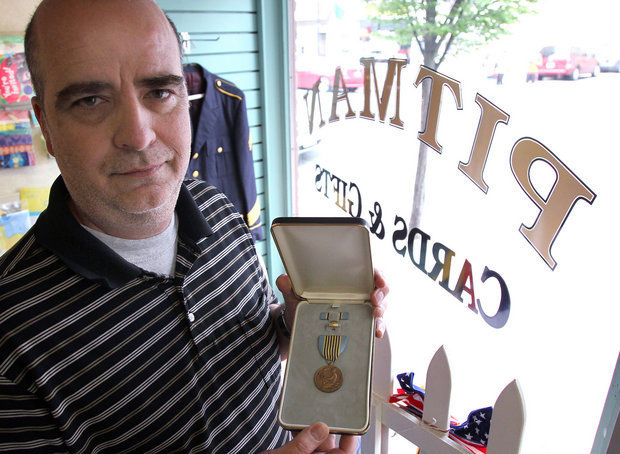 More than two decades after the event that earned him one of the highest awards the U.S Air Force has to offer, Jim Pierpont, 54, still isn’t sure if he’s a hero.

“There are other people I’d classify as heroes before I said it about myself,” he says in a restaurant in downtown Pitman. “There are heroes that walk among us every day. I’m not that guy.”

Monday will be a difficult anniversary for Pierpont. Memorial Day this year will mark 21 years since he single-handedly ended a shooting at what was then McGuire Air Force Base.

Pierpont, a master sergeant with the 305th Security Police Investigations squad, had only been at McGuire for a week in 1993 when Leroy Swain, a retired Air Force veteran, opened fire in an office on base. He had already killed one officer, Maj. Robert Lowry, and was holding several other people hostage in the office.

“I don’t remember hearing a noise,” Pierpont says. “I remember concentrating, breathing — everything I learned on the shooting range and in the classroom.”

Pierpont found Swain standing in a doorway. He called out the gunman’s name to get his attention, and in the split second that followed, Pierpont fired his weapon, fatally wounding Swain and saving the lives of the hostages. In 1995, he was awarded the Airman’s Medal, the highest non-combat honor in that branch of the military. In 1998, he retired from the Air Force.

“You have to understand this was a small snapshot in a 20-year career,” he says. Needless to say, he’s done a lot since then. Pierpont now runs Pitman Cards and Gifts on Broadway with his wife Ronda. They have two children, and Pierpont is a member of the VFW, Knights of Columbus and borough council. Still, he remembers the difficult aftermath of the incident.

“The young major who died had a wife and child, and the individual who did it also had a family. It was difficult to see the news coverage. I say a prayer for those families.

He spoke with military chaplains, a military counselor and private therapists.

“I didn’t do anything wrong,” Pierpont says. “It took me the longest time to understand that.”

Eventually, he adds, he was able to find something positive in the experience.

“How it changed me — it’s made me appreciate things a little more,” Pierpont says. “How cool would it be if we all spoke a little softer, smiled a little more, helped each other?”

Later in his career, Pierpont would show new officers the hallway where he earned his medal. Each time, he found, they were respectful and took him seriously.

But back to the original question. Is Pierpont a hero?

“It’s hard to describe how I feel about it,” he says.

The medal and certificate he received in 1995 sat in a chest in his mother’s house for 20 years.

“There’s plenty of people that go through life deserving recognition that never get it. Pitman is reflective of small towns throughout the nation. We take pride in helping our neighbors. The people deployed right now, they’re heroes. The brave men and women who made that sacrifice, they’re heroes. The people who work all day and still make dinner for the kids and go coach baseball or soccer; the families who send off their children and have to keep going at home. They’re the fabric of society.”

In the window of his Broadway storefront, Pierpont displays a small array of military memorabilia. If you aren’t traveling on foot, you’ll miss it completely. But if you happen to pass by, and it happens to make you think about those heroes on your day off Monday, Pierpont says that’s good enough for him.

“Just a few minutes to reflect on that. To pay our respects,” he says. “That’s huge.”