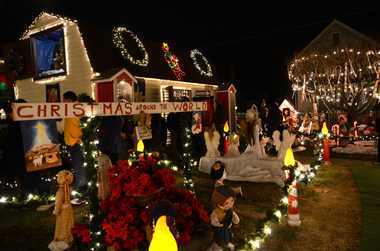 On his property, Scrooge and Jacob Marley tell the story of Christmas past, present and future, and Santa’s elves work in time with music building toys for Dec. 25.

Across the street, the Grinch who stole Christmas waves from the porch of Hagerty’s mother’s house, where life-size carolers — dolls in Victorian dress — stand.

For more than a quarter-century the Hagertys’ displays, which spans five Pitman Grove section properties, have brought the North Pole to South Jersey.

And the whole spectacle — which has become a holiday tradition for many families — started with a couple strings of lights when Hagerty was a little boy.

“To make a good display, you have to make the kids feel like they are in their own wonderland,” said Hagerty, whose father started the tradition more than 50 years ago with lights covering their house.

Contests aren’t what it’s all about for the Pitman family, he said. Hagerty hasn’t entered his own property into a contest since the late 1980s. Instead, it’s about sending his personal message of Christian faith to parents who walk through rows of displays including mangers depicting baby Jesus and the first Christmas.

Most of the moving dolls — elves, Nickelodeon characters and penguins, all wearing red Santa hats — are set up low to the ground at a child’s eye level.

That could be what has made kids, many now adults, respect his property. In almost 30 years, only one animated doll was stolen.

“Only one thing was taken more than 25 years ago,” he said. “The kids respect it, and have always respected it and come here with their parents and it never gets touched.”

Hagerty believes nobody wants to put tradition in jeopardy by destroying what could be somebody’s most-loved moving characters from the California Raisins to the six-foot-tall toy soldiers.

Tradition, he added, is a very important aspect of any annual holiday display. The nostalgia-factor is crucial for kids and their parents who pass the Pitman Christmas tradition down, Hagerty has found.

And, a solid display should have a scenic area where visitors can take photos. Hagerty expects scenes on his property have been on hundreds, maybe thousands, of family Christmas cards.

“They come early and ask if they can (take photos) at scenes,” Hagerty said,

“I had a guy come in the other day and ask if he could take a picture in front of the reindeer barns with his brand new Harley (motorcycle) for his Christmas card.”

By Black Friday the enchanted scene is set. But it takes six to eight weeks of work to get the lights mounted and extension cords run. After a fall off the roof 10 years ago, Hagerty warns to “respect electrical wires and respect the roof” to avoid injuries. Plus, be mindful of your neighbors.

“Coming from me, who is a little extravagant, it gets a little crazy,” said Hagerty, whose property attracts hundreds of visitors every season, seven days a week starting on Black Friday. “You still have to be considerate of your neighbors.”

While he encourages homeowners to deck their lawns with boughs of holly and twinkle lights, and to set it all to music, Hagerty does recommend shutting down at an appropriate time each night not to disrupt neighbors.

Hagerty is counting himself out of the running in South Jersey Times’ Christmas light contest. But you can nominate your lawn, your neighbors and friends until Dec. 9.

To nominate a display email a photo and the property’s address to news@southjerseymedia.com. The top five lawn displays will be featured in the South Jersey Times’ Indulge entertainment section. The contest winner will be announced on Dec. 23.