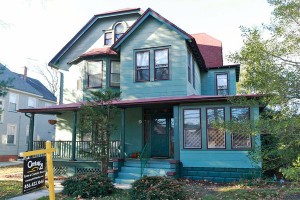 The big news in Pitman in recent weeks centered on beer, unusual for the historically “dry” BYOB Gloucester County borough.

That means Pitman native Justin Fleming will be able to share his beer-brewing hobby with everyone.

Another microbrewery plans to locate here as well, says Mike Lentz of Keller Williams Real Estate, in Sewell, a Mount Laurel native who moved to Pitman from Philadelphia at the urging of his wife, a graduate of Rowan University in nearby Glassboro.

“She loved the small-town atmosphere and thought the people with whom she went to college who grew up in Pitman were really cool,” he says.

What’s more, Lentz was enamored of the borough’s convenience, as well as its “older, architecturally significant homes.”

“People sometimes call it Mayberry, but I really think that it is a good thing,” he says. “My kids know just about everyone in Pitman, and everyone knows them.”

Though two visits here revealed no one who resembled Barney Fife or Floyd the Barber, it was easy to see that Pitman is a community deserving to be toasted at Kelly Green Brewing.

One thing definitely on its way up is residential real estate.

Of the market, Lentz says: “It’s improving greatly. Pitman had the same problem as many other communities when the housing market began its downturn in 2007, but by 2011 and 2012 it was showing definite signs of recovery.”

The boost in volume has been matched by a year-over-year rise in prices, Lentz says: “They are up 4 percent to 5 percent over 2014.”

Twelve houses are currently under contract, Settar says, and some of them are short sales, in which the lender accepts a price less than what is owed on the mortgage.

“There are still a lot of bank-owned properties on the market, which is good for both investors and first-time buyers,” she says.

“There are some good opportunities in Pitman, given the variety of sizes and prices,” Settar says. “There are some very cute single homes for sale as low as $70,000, and $250,000 will get you a 3,000-square-foot contemporary on an oversize lot.”

If you remove the “gut jobs,” Lentz says – the complete rehabs and the foreclosures – you can get a move-in-ready house for as low as $60,000 in Pitman these days.

What was “unique” about last year’s top-selling house?

“It was a large, historic house dating from the early 1800s on a lot of land,” Lentz says. The one now under contract is a large contemporary home with an in-law suite.

There isn’t much new construction here. The 2.3-square-mile borough is built out.

“Just two or three a year maximum on a vacant lot or where the previous structure burned down,” Lentz says.

Buyers are primarily people moving within the borough or natives who moved away for a while and want to come back, he says.

“What I have seen is an interest in small houses like the phenomenon we see on TV,” he says.

The microbrewery is just one example of the continuing revitalization of the business district along South Broadway, with the Broadway Theater as its centerpiece.

“There are a lot of art galleries, shops, and restaurants – all within walking distance,” Lentz says.

“It is lovely,” Settar says of downtown, “and constantly revitalizing.”

Town By Town: Pitman By the Numbers