First-ever brewery in historically dry town is on its way! 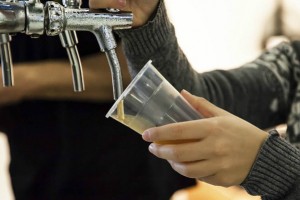 When they started six years ago, there was no grand plan, no investment strategy – the only plan was to make the beer good and then make it better and even better after that. Not to sell, but to drink – maybe give some to friends, but never at a charge. After all, it was just about the beer.

Gradually, however, Justin Fleming, his wife Jeannette and best friend Dave Domanski realized they not only enjoyed the process but realized that they were pretty good at it too.

And from that first batch – using nothing more than a cheap homebrewing starter kit purchased off the Internet – the group is now preparing to open what will be the first-ever brewery in the 110-year history of the borough.

The brewery, Kelly Green Brewing Co., is expected to open this coming March and will be located in the downtown on South Broadway, two doors away from the Bus Stop Music Cafe – whose owner Fleming also knows well.

The brewery will feature “eight to 10 taps full of homegrown craft beer right from the heart of Pitman. There will be stouts, porters, sours, IPAs, pale ales, wheats … and some surprises as well,” Justin said.

There will be a tasting room, along with growler fills – a 64-ounce fill that patrons can purchase and take to any BYOB restaurant in town.

“We love beer, we love talking about beer and we gave it a chance,” he said.

Justin and his wife were born and raised in Pitman. They were high school sweethearts at Pitman High School and after they got married, Justin bought the house that he grew up in as a child.

“Essentially, it’s the only place we wanted to be,” Justin said. “I love the idea of waking up in the morning, going to the brewery … and being able to put the (“be right back”) sign to go pick up my daughter up from school down the street.”

Justin handles the design aspect of brewery, while Jeannette handles the business side with Domanski focusing on the brewing.

He said being raised in Pitman and now raising a family in the borough, he has a real stake in the community and wanted to be a part of something that would help boost its economy.

The team recently received certain approvals from the borough’s planning and zoning board by a unanimous vote. The three are now in the permitting process and waiting for the state to approve their application.

In 2008, roughly 60 percent of borough voters rejected a referendum to allow for a liquor license. But New Jersey’s limit brewery licenses do not require voter approval. State legislation in recent years has made it easier for the establishment of breweries and brewpubs, befitting to the increasingly popular craft brewing industry over the last 20 years.

Breweries aren’t like bars and liquor stores, they don’t require a liquor license, which in Pitman, would require voter approve through a referendum.

The Bus Stop Music Cafe became the first establishment to legally sell alcohol in the borough. Pitman has had a BYOB policy at its restaurants for years. In 2013, that policy was expanded to include sidewalk dining.

“Many people are all super excited about the prospects of this place,” Russell said.” However, he noted that “many had questions.” ”I explained to them how this differs from a liquor license,” he said, adding that afterward many came around to the idea.