Jim Six: To market, to market 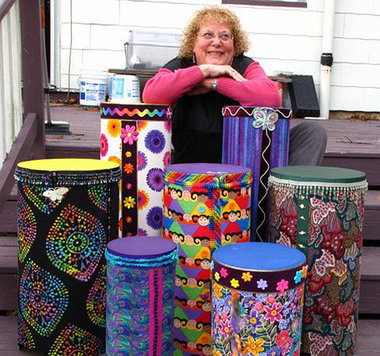 After more than 40 years as an early childhood educator, working with infants and toddlers and “training big people who worked with little people,” Martie Mollenhauer is now retired.

That does not mean she’s sitting in a rocking chair.

No, Martie is too busy trying to “bring my spirit” to Pitman, where she lives.

“I always believed in the need to value and affirm people. Life is a dance of relationships,” she said.

Toward the middle of last summer, Martie got involved with the Uptown Pitman Farm Market project and decided to focus her energy there.

Now she’s coordinating it with a small team. As a professional-level schmoozer, Martie is perfect for this job.

Here’s an example: She came to see me play recently at the New Dodge’s Market in Elmer and did her best to convince one of the owners to bring some of their products to the Uptown Pitman Farm Market this year.

She has developed South Jersey Healthcare as a major sponsor for the market, which is held at Pitman’s Sunset Auditorium on Laurel Avenue.

The market, which runs from 8 a.m. to 2 p.m., will open June 2 and run every Saturday until — well, Martie would like to keep it going until around Halloween if it doesn’t get too cold.

She has already managed to snag a guest for the opener — author and star of the PBS program, “Christina Cooks,” Christina Pirello, who specializes in natural and whole foods.

The Pitman market will be about more than just the food, said Martie. There will be “Take Back Your Health” days once a month, including things such as blood pressure screenings and nutrition classes. The Pitman police department will conduct safety classes. There will be special demonstrations, such as Zumba wth Kathy and a hula hoop class run by Yoga Inspired.

And there will be entertainment.

“It’s never going to be an open mic night,” she said. The notion is to invite only proven, talented musicians to perform. Among those already committed: Wendy Betz, Sharky and Butta, Dave Armor and the East Coast Outlaws.

Martie’s biggest gift may be her way with people and her ability to make connections. The complete opposite of shy, Martie will walk up and start talking to you and be your friend in minutes. I have seen her do it.

Awhile back, she got interested in rhythm and drum circles. She managed to bring a drum circle expert to town and 25 people turned out for the workshop.

Since then, Martie and her husband, Bill, have made about 40 colorful drums, some of which are for sale.

She also makes prints and cards from her photographs. Her pictures — of shoes. She’s fascinated with shoes because they unify us while expressing our diversity — and drums will be on exhibit at the Bellefonte Cafe in Wilmington, Del. starting in about a week. She recently had a three-month exhibit at the McGowan Library in Pitman.

Her photo note and greeting cards are on sale at Merritt’s Flowers and the Hallmark store in Pitman. And her photos are online at her Photoschmoozer blog.

“I have a different way of taking pictures,” said Martie. She doesn’t concern herself with any of the technical aspects of photography. She sees things and chooses what she wants in the photo. Period.

All of Martie’s interests seem to coincide at the Uptown Pitman Farm Market. She even hopes to have a drum circle there sometime this season.

The Uptown Pitman Farm Market is ideally suited to hosting more than just a place to buy produce. The Sunset Auditorium is a large covered space and there’s even a full-sized stage.

Martie said she’d like to have chairs and tables with umbrellas so customers can sit and relax and enjoy the weather, the environment and the entertainment.

She’s also been talking to Main Street Woodbury Executive Director Larry Geiger about creating some kind of collaboration between the farmers markets in Pitman and Woodbury, where a farmers market is held on Friday afternoons during the summer.

And she’s trying to get a professor from Rowan University to send his photography students to shoot projects at the Pitman market.

“I believe in synchronicities. Everything is special and everything has a story,” she said.