Mamma Mia! A flashmob and ABBA tribute band are coming to Pitman 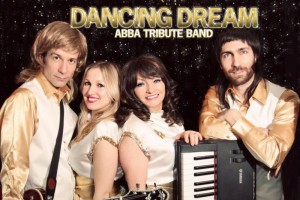 You could change your mind, but you should be first in line for the upcoming Dancing Dream, ABBA tribute show at the Broadway Theatre of Pitman.

Dancing Dream will perform all of the band’s 70s favorites like “Dancing Queen,” “Take a Chance on Me,” and “Super Trooper,” while raising money for the Pitman Economic Development Committee’s Theater Avenue project.

“All the proceeds will go to the Theater Avenue project,” said John Fitzpatrick, chairman of the Pitman Economic Development Committee.

The plan is to develop the space into a town square that visitors, shoppers, and theater goers can enjoy.

To help envision what the space could look like when completed and to raise more awareness about the project, a special event will take place on Theater Avenue on March 19 at 7 p.m.

Musicians from the Pitman High School band, directed by band director Steve Carey, will perform a musical number while members of the Pitman Chamber of Commerce and other volunteers “build” the space into a version of what it could be once the project is complete.

“By the time we get to the end, it will hopefully show people what the space can be used for,” said Lisa Morgey, president of the Greater Pitman Chamber of Commerce. “It will be an illustration of what it could be like.”

Morgey said, with the help of the Broadway Theatre of Pitman’s props department, the Flashmob will place tables, chairs, lighting, decor, and possibly flooring in the space to give it a feeling of what the Theatre Avenue project could offer when complete.

Carey is letting the students have fun with this event and put senior Ben Bierman in charge of the planning — with his final say, of course.

“The idea is to start with a small group of musicians playing a simple song that everyone can learn quickly,” Bierman said. “That group will be in one spot and start the song. Then, throughout the song, there will be (musicians) in other places who will filter in, playing the song.”

He said all Pitman middle and high school students are invited to participate.

“Now we have to get everyone in on it,” he said. “It sounds like it’s going to be fun. We’ve never done anything like this before.” 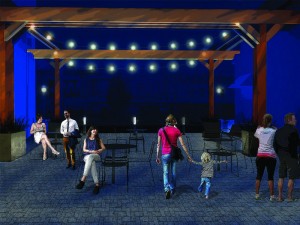 Artist’s rendition of how the Pitman Theatre Avenue project will look in the evening when it’s completed. (Photo provided by Greater Pitman Chamber of Commerce)

Morgey said the chamber and economic development committee have been working together on the Theatre Avenue project for quite a few years now, and have raised about half of the money needed to get the project started.

“This is an unusual approach to a project like this,” she said.

A project like this would normally be funded by the municipality’s government or a grant. So, trying to get donated funding has been somewhat difficult.

“It’s not saving anyone’s life or anything, but people will be amazed at the difference it will make in town,” she said.

Having a town square-style park in the middle of the downtown area will be inviting to new businesses, she said.

The park will also benefit the chamber and its members.

“It gives the chamber an opportunity to have more activities,” she said. “We can have something every weekend and if there’s nothing going on, it’s a place for people to gather or stop and rest. We want people to spend time downtown. Not just drive through or run a single errand and leave.”

And she hopes the Flashmob will help to demonstrate that very idea.

“It should be fun,” Morgey said.