Mayor throws himself in front of car to save dog 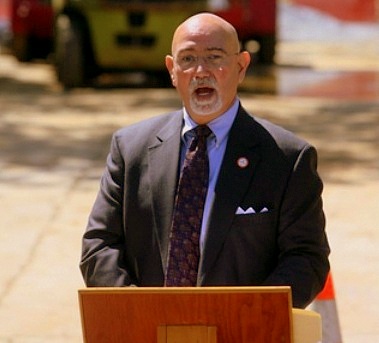 Former Pitman, New Jersey mayor Michael Batten risked his life when while on a walk, his dog broke free and ran into traffic. Though he suffered a number of broken bones, Batten was able to push his dog out of the way of an oncoming car to save its life.

Batten was walking his dog down Laurel Avenue last Sunday afternoon when suddenly, the pup got loose and bounded right into the street. Without a moment’s hesitation, the man sacrificed himself to save his companion.

“Mike jumped into the street to save the dog,” said mayoral successor Russell Johnson. “He literally threw the dog back onto the curb…. But as soon as he did that, he got hit by a car.”

Volunteer firefighter Kevin Austin was driving by when the incident happened.

“He started administering first aid, with the help of some residents, while they waited for an ambulance to get to the scene,” Johnson said. “Pitman residents continue to show when things get tough, they’re willing to help. Pitman is a volunteer-based town and guys like Kevin are always stepping up, neighbors are always stepping up. It’s a small town. That’s what happens – people look out for each other and help one another.”

“The residents were really great,” Austin said. “They came out and helped. They retrieved a pillow for Mike, and a blanket so they could treat him for shock.”

Batten was taken to Cooper University Hospital to be treated for five broken ribs and a broken vertebra in his lower back. Johnson said Batten’s courageousness “pretty much sums up” his character.

“I’m not surprised he didn’t hesitate,” Johnson said. “He’s just that kind of person. He thinks about everybody but himself.”