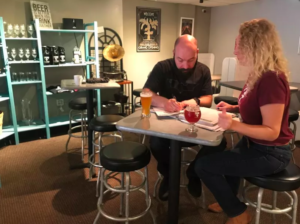 A special ruling has recently been announced and it’s affecting how local breweries throughout the entire state conduct business.

Breweries are popping up across the South Jersey area and not only have they become a source to taste a locally brewed beer, but they’ve also become a go-to spot for people to hold events.

But weekly open-mic nights and other events and fundraisers are now in jeopardy after a special ruling was put into place on Monday, September 24th.

“Well, the regulations are considered a special ruling by the director of the Alcohol Beverage Control in New Jersey, which severely limits the number of events we have a year to 25,” said Chuck Garrity, owner of Death of the Fox Brewing Company in Clarksboro. “That includes everything from charitable events, fundraisers, music events, live bands, [and] Quizzo.”

“We have done things that benefited the police, local animal rescues, children, and veterans,” said Richard Myers, one of the owners at Human Village Brewing Company in Pitman. “So, putting a limit on this doesn’t just limit our event ability for things like open mics, but it also limits the amount that we can help the local community.”

But the ruling doesn’t stop there. It also states they can’t display menus for area restaurants.

“These are family-owned restaurants to make sure that we are driving as much business and we’re bringing as many visitors into the community as possible,” said Megan Myers, one of the owners of Human Village Brewing Company. “It really hurts and hampers the town’s ability to benefit from the economic growth of the craft-brewing industry.”

According to both owners, local municipalities are passing resolutions and writing letters to the state expressing their opposition and residents are also stepping up.

“There’s a petition going on right now,” Megan said. “We have over 15,000 signatures on brewedindepdent.org.”

They’re hoping people will sign it to help show support.

“This is our opportunity to tell them that there is a demand and that there will be a chilling effect on the public and on our communities,” Megan said.

“I think the state and some decision makers really need to understand … that breweries are filling an area and a need that you just can’t get at a sports bar,” said Garrity.