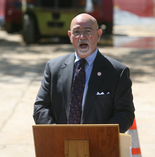 Pitman officials and business owners will honor longtime volunteer and former mayor Mike Batten at a special dinner Jan. 17. The Lifetime Service Award is given out every two years by the Pitman Chamber of Commerce to nominees with a long history of contributing to the town.

“I’ve been out of office here for a couple years, and you’re supposed to fade into the sunset and never be heard from again,” said Batten. “But really, it’s incredible of them to have thought of me.”

Batten moved to the borough from Pennsgrove in 1969. Shortly thereafter, he began volunteering with the school’s wrestling program, eventually serving as head coach. He began serving on borough council in 2003, and was elected mayor in 2007 before leaving office in 2011. His other roles in town include starting the Pitman Garden Club, and serving as chair of the borough’s historic commission, memorabilia committee and town clock committee.

“Pitman is an incredible town because everything here from the sports programs to politics is volunteer,” said Batten. “Volunteering is a tradition here. Those volunteers keep the town going. When people run for office they stick themselves out there just for the opportunity to help their community, and that’s a pretty incredible thing.”

His personal highlights include his time as mayor, which he called “the biggest honor” of civil service in a small town, and working with kids.

“When you do anything to help kids grow up, you’ve accomplished something,” he said.

Unfortunately, Batten has had to scale back his involvement because of a car accident in January 2013, but he remains a popular figure in town.

“I haven’t been able to work or be as involved in the past,” he said. “But I’m looking forward to the day that I can again.”

The Lifetime Service award dinner honoring Batten will be held at Venice Italian Eatery, 68 S. Broadway, on Jan. 17 at 6:30 PM. Tickets are on sale at De Cotiis Chiropratic Center; Premier Accounting; and Alfred Stephens Salon located in Pitman. Admission is $30.00 per person, which includes dinner and music.