Pitman has a bakery again! Meet the owners of Broadway Bakery 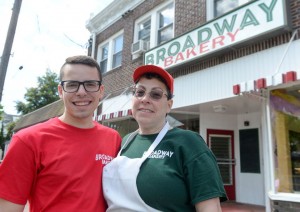 A new bakery, called Broadway Bakery, is calling Pitman home. It will be the second bakery to open up shop in the landmark location that housed Pitman Bakery for 44 years until 2012, but the new owners — Christine and Michael Mastrocola, a brother sister duo from South Philly — say they’re in it for the long haul.

“We have people tell us stories all the time about how they’d come in here when they were a kid, or how certain things taste just like they remembered having when they old shop was here,” said Christine. “When they try to compare though, I tell them ‘We aren’t Pitman Bakery. We’re us and you should give us a try.'”

The two were bread bakers for many years, perfecting their craft, making delicious rolls and doughs. After moving to Washington Township and finding that the bakery location was vacant, the team decided to buy the storefront from previous owners, Veronica and Dan Murphy — who ran a bakery in the same location for about a year between April 2014 and May 2015 — and they got cooking, using their own recipes and favorite cookbooks.

Christine enlisted her son, Nick, and his fiance, Siobhan Ryan, to fill managerial roles and things began coming together, slowly but surely.

The crew got together in the store two years ago, scraping paint from shelves and cases and preparing the old fixtures for the future but not taking too much away from the storefront’s past.

“All of the pastry cases with the copper edges are pre-World War II and the shelves and cases on top are all solid oak wood,” Nick explained. “They were painted bright blue which took a long time to scrape but we cleaned them up and they’re good to go.”

Separating the area where customers can peruse the baked goods is an oak doorway from the original bakery that leads patrons to a seating area.

“It took about two years to get this place cleaned up and ready,” Nick said. “But here we are.”

While the history of the original Pitman Bakery still stands strong, radiating from the cases and walls, the modern bakery of today shows through the treats lining the shelves. They feature bright cakes frosted and decorated by head cake decorator Katelyn Cooper, cookies iced to look like butterflies and baseballs, variations of macaroons and donuts, luring customers with enticing smells.

“I got bored,” said Christine, explaining the shift from the bread business to the sweeter side. “We did bread for years but I wanted something new to do.”

The team of bakers and decorators are constantly coming up with new recipes and twists on old ones to test on the community, seeing what sells and what doesn’t.

“We have all kinds of things. Of course donuts go quickly. We have cookies and cakes, bismarks seem to be the best seller,” Christine explained, pulling the treat which looks like a cinnamon bun coated in chocolate, from the shelf.

No matter what new recipes are tried, the shelves constantly seem to empty out by the end of the day – something that came as a shock to the team on their first weekend.

“We had a soft opening in March,” Nick said. “We kept it very quiet, took the paper off the windows the night before and put up one post [on Facebook] about it generate some interest, but we were trying to keep it small.”

It didn’t quite go as planned.

“Everything was gone. We sold literally everything,” he said. “It wasn’t a soft opening. It was like a push off the cliff and hoping that you maybe have a parachute. But it was great, the community was just that excited about us.”

That excitement has only grown since the official grand opening has been set for Sunday, May 7.

“We’ve definitely got shoes to fill, big shoes,” said Nick. “But we’re wearing our own shoes first. You have to, you have to walk in your own before you worry about filling somebody else’s.”

Overall, though, the Broadway Bakery team is happy to be in Pitman and are ready for the grand opening. With years of experience in the baking business under their belts and a more than warm reception from the community, the Mastrocolas are confident their business will stay.

“The community has been nothing but supportive and welcoming to us,” Christine said. “We’ve invested a lot into this and we’re very happy to be here, so, we’re in it for the long-haul.”

Read the full article at NJ.com