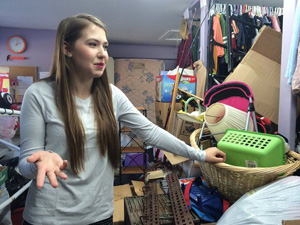 A borough high school senior will appear on the Steve Harvey Show this week to promote a charity she started at the age of 12.

Katelyn Darrow, who founded the Angels of God Clothing Closet when she was still in middle school, traveled to Chicago in late September to appear alongside Harvey on his talk show. The call came just two days before it was time to shoot the episode.

“The experience was amazing,” said Darrow, standing among piles of donated items for an upcoming fundraiser at the Angels of God storefront. “Especially because I watch the show all the time. Steve Harvey is so inspirational. He’s been homeless, so he knows what it means to be in need.”

Darrow was recognized under the auspices of Harvey’s Heroes, a segment that recognizes people for their community service. She received a special monogrammed jacket with the show’s logo on it and a $5,000 gift card to gilt.com, an online clothing and furniture retailer. Darrow plans to use a portion of the MONEY for the operation of Angels of God.

The honor makes her the second Gloucester County resident this year to be honored by the show. Washington Township’s Victoria Draper also appeared on the PROGRAM for her work with The Rose Petal, which provides prom dresses and accessories to girls in financial need.

“His show is a national platform,” Darrow said. “So it was an amazing opportunity to talk about it on TV. Hopefully more people will hear about Angels of God.”
Darrow’s mother, Elissa Darrow, accompanied her on the trip.

“I’m very, very proud. I think I lasted 30 seconds before I started bawling,” she said of being on set. “I lost it when I saw her up there. She never ceases to amaze me. She’s always coming up with new ideas.”
The episode, which will air at 2 p.m. Thursday on NBC, comes at a busy time for Angels of God. The group is collecting donations for its HALLOWEEN costume drive until Oct. 24, and will hold a fundraising yard sale this weekend. On top of it all, Darrow is preparing for the SATs and looking at COLLEGES.

“I keep telling her I don’t want her to limit her options because of this,” her mother said.

Still, she says she’ll keep working with the group she’s run for the past six years no matter where she goes.

“I definitely still want to be involved,” said Darrow. “Time will tell.”

The Angels of God yard sale will be held from 8 a.m. to 2 p.m. on Saturday at the group’s Pitman headquarters, 334 S. Broadway. The clothing closet is also accepting donations of Halloween costumes until Oct. 24 as well as its usual collection of toiletries, clothing and toys.

To make an appointment to drop off a donation or to inquire about receiving assistance, visit angelsofgod.org or call (856) 625-8652.