Pitman marching band enjoys a success beyond its size 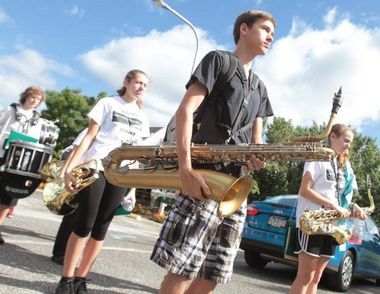 Call it the little band that could.

With just 33 members, the Pitman High School marching band did the borough proud this season. After taking first place in the Tournament of Bands New Jersey State Championship, the band took third in a national competition of 18 bands in Allentown, Pa., last week.

“It always amazes me what these kids are capable of,” said Stephen Carey, band director. “We crossed a lot of hurdles throughout the course of the season.”

The odds are usually stacked against smaller competing bands. Pitman, with a total of about 400 students in its high school, often had to compete against bands from schools two or three times its size.

“We’re such a small band, most people wouldn’t expect us to win,” said Jolie Delia, 17, an assistant drum major.

But that small size resulted in a sense of community among the musicians.

“The fact that we’re so small helps us work more as one,” said Jordan Creamer, a junior who plays piccolo. “We’re really close to each other, so we work better together.”

The same went for Guy Williams, also 15. Although trying to hold your own in a competition with bigger, more renowned bands can be intimidating, the unity in Pitman’s band made its chemistry stronger.

“At first it’s unnerving, but it goes away,” said Guy. “You feel proud of who you are and how your band is.”

He tries to set an example for his younger colleagues, who can join the band as early as seventh grade.

“I feel like I have to display positive behavior so they get the idea on how they should act when it’s their turn to be a leader.”

The high school marching band is a point of pride in any small town, and Pitman is no exception. Borough council will honor the band at a meeting Nov. 25.

“The town has always been proud of our band,” said Carey. “We really do represent the community. We’re a two-and-a-half-mile square town. There are people out there that know of Pitman because they’ve seen the band.”