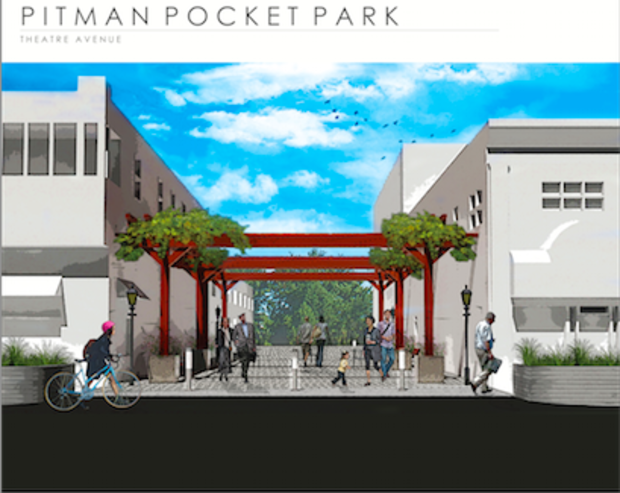 A campaign launched by the Pitman Economic Development Committee to turn a little-used side street into a manicured public space has gotten a major boost in the form of a $10,000 donation from the town’s chamber of commerce.

“The park is the committee’s biggest long-term project at the moment,” said Lisa Morgey, president of the Greater Pitman Chamber of Commerce. “Of course we wanted to contribute to it.” Theater Avenue, a side street off of Broadway in Pitman’s business district, has long been devoid of activity beyond its accommodation of a handful of parking spaces. John Fitzpatrick of the economic development committee said plans to revamp the space into a small public square, or pocket park, stretch back about two years.

“We’re taking an area — which now is pretty ugly, to be honest — and making it part of the revitalization of Pitman,” said Fitzpatrick. He added that in an era when Glassboro, Woolwich and Harrison Township are all creating downtown public gathering spaces, Pitman’s quaint main drag had new competition.

“For us to compete, we need to keep up,” he said. “We need good strong businesses and we need to look good. This is part of us working to attract people.”

The phrase “pocket park” is an apt title, since the park will stretch about 70 feet back from Theater Avenue’s intersection with Broadway, and span the width of the road, which is only about 15 to 20 feet wide. The intersection, flanked by two large buildings, will be built into an entryway with paver bricks and landscaping. A pergola with potted plants will create an arch over the square, and planners hope to include seating and space for outdoor performances.

“Downtowns have become places where people are spending leisure time,” Morgey said. “It’s less about errands and more about time with family and friends.”

The total cost of the park is projected at slightly less than $154,000. Officials hope to raise the money by way of donations through 2015 and start construction next year. “I’m confident we can raise the money,” Fitzpatrick said. “The chamber of commerce wanted to kick this off strong.”

Fitzpatrick said the Broadway Theater is the downtown’s anchor business, bringing about 100,000 people downtown each year, and that officials hoped to encouraged arts-oriented business in the neighborhood.

“That’s our plan — to become an arts town anchored by the theater,” he said. The chamber has also announced plans to give out three grants to downtown businesses looking to upgrade the facades or awnings of their storefronts. Each grant is worth $1,000 and falls under Pitman’s greater mission to further beautify the borough.